skip to main | skip to sidebar
I’m a New Yorker, and I run. I get bored doing laps around the park or running up and down the Hudson River path. Instead, I use my long-distance runs to explore the neighborhoods in my city, especially in the outer boroughs. I’ve decided to take a cheap digital camera with me on some of my runs to document the city and its changes as seen when crossing on foot.

Myrtle Avenue to Forest Park in Queens has become one of my favorite running routes. It cuts through a number of distinctive, lively neighborhoods—Clinton Hill and Bushwick in Brooklyn, Ridgewood and Glendale in Queens—and ends in a deeply wooded park. I took many photos along this stretch last winter, which you can see here.

On this run, I came out the other side of Forest Park and pushed on to the Long Island Railroad Station in Jamaica, Queens. By the time I got past the parts I've already photographed, the light was fading fast, so I don't have too many pictures. The run was about 10 miles; I took the LIRR home. Six bucks! But less than 15 minutes, too.

I ran in the Snowpocalypse

Only 1.5 miles. But in boots, every mile counts for two. Right? 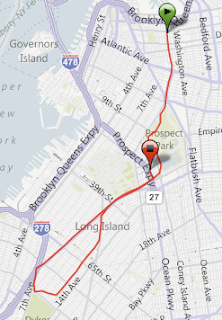 When I was a kid in Aurora, IL, my grandparents lived on Lehnertz Avenue in a neighborhood called Pigeon Hill. Every year at Christmas, since 1951, the neighborhood puts on a Christmas display. One one side of the street, every house has cut outs of shepherds and sheep, on the other (my grandparents') side, "books" telling the nativity story. It all leads up to a crèche of dubious constitutionality in the public park at the end of the street. Buy a house on Lehnertz and you inherit the books or the shepherds in the garage or the basement; they've been using the same displays since the early 60s.

Here in New York, the local Christmas lights neighborhood is Dyker Heights. It's not really a community effort. Instead, it's a handful of families trying to out-Clark-Griswold each other.

This run was about 12 miles, and crossed through Kensington, Boro Park, and (I think) Bay Ridge.

Merry Christmas and a Happy Hogswatch. 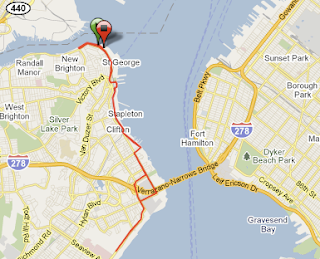 I ran it in respectable (for me) 2:05. I took only a few pictures because, well, it was a race and I thought I might have a shot at my first sub-two. Also the sun was low and bright, which made it hard to get good shots. But it's a terrific course—it winds along the Staten Island waterfront, so it has a lot of visual variety, which makes for a much easier run. Plus... free boat ride!

This was my first-ever run in the borough of Republicans and Wu-Tang. I look forward to coming back for a more leisurely look around and better pictures.

Other great sites about exploring, running or photographing the city

Want to submit your own photojog to this blog?

Send a link to your Picasa or Flickr slideshow/gallery to:
photojogblog at gmail dot com